1967 – 1968 Respect
In 1967, having played 5 jobs in different bands without anything happening, Allan advertised for other people to play with. Guitarist Benny Dyhr and bass player Bjarne Thostrup, replied to the ad and a joint venture came into existence. Robert on drums joined in and Respect was formed. The music was mostly cover songs with a few attempts at writing their own songs. Over a period of one year, Respect played 78 jobs, mainly in Copenhagen and Zealand. 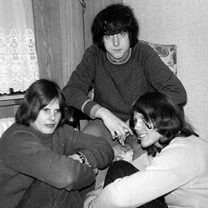 1968 – 1969 Second Review
Bjarne Thostrup wanted to stop and Benny knew a guy in Schneekloth Grammar School, Peter Rolnes, whom he thought was a better drummer than Robert. Then they had no bass player. So Allan took up playing bass and a new band had formed. At first with one more guitar player, Bjarne Arildsen and a piano player Jorgen Persson. But they soon became a trio playing what was at that time known as “progressive beat music”. Here, Allan played bass, Peter Rolnes drums and Benny Dyhr guitar. It was in this band they really started to play their own compositions. Collaboration with lyricist Torben Bille, another Schneekloth alumni, started here. Being  merely 20 years old lads, they had only scarce knowledge of the record industry and all the needs-to-know things for an up-coming band. In short, somrthing had to be done. In 1969, Paddy Gythfeldt joined the band, and they became “Hair”. Second Review played 17 jobs in Copenhagen and Zealand in 7 months. 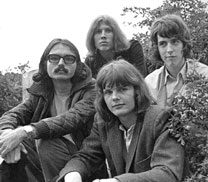 1969 – 1971 Hair
The songwriting and the collaboration with Torben Bille was continued here and they got a “personal manager”, Peter Rud (today retired Supreme Court Attorney). The marketing got professional and as a result, a lot of concerts, live performance in DR-TV, DR-Radio, SR-Radio and great press coverage.  In their the first year of existence they made the album “Piece”, probably the most expensive record-production in Denmark at that time. The album sold what would today correspond to “going gold”. Following this,  4 singles were released, one of them “Happy Child” making a no. 7 at Denmarks Radio P3’s Top 10. Just before initiating recordings for their second album, they disbanded. Hair played 93 concerts of 90 minutes during this 23-month period. More info about Hair. 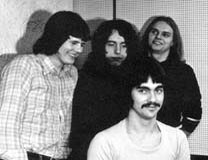 1972 – 1973 RiverHorse
Allan and Peter Rolnes started the band “RiverHorse”. Peter, who was at that time one of Denmark´s foremost rock-drummers, wanted to play bass and Allan who played bass, but was originally a guitar player, wanted to shift to playing guitar again. They looked for people to play with, and after a while found Dan Johnsen, guitar player from “Pocket Size” and Bo Pedersen on drums. In this context, songwriting really developed and they work hard with elaborate vocal arrangements. During this period, 20 new songs were produced. The repertoire mainly consisted of Allan’s songs, plus a couple of Peter´s and Dan´s and a few cover songs. They only managed to play 3 jobs.

1973 – 1975 – Allan Sorensen
Allan continued writing songs and at that time operated a demo studio in Rodovre with a friend Peter Bohm, who owned the place that Hair and RiverHorse had used for rehearsing during 1970-73. New collegue-players were found, Peter Klitgaard on guitar, Bo Summer on drums, alternately with Peter Rolnes who also played bass. With Jan Rosengaard on piano and organ the lineup was complete, and in 1975 a demo for a solo LP was completed. AS always, Torben Bille’s lyrics were in English. By this time, all music publishing in Denmark in practice had to be exclusively in Danish. Allan, however, had always written and sung his songs in English, and couldn´t see himself going through the process of converting his entire catalogue into Danish. Allan wrote 29 songs during this period From 1976, other interests, children, family, business and various commitments made their presence felt, and music was not given first priority any more. 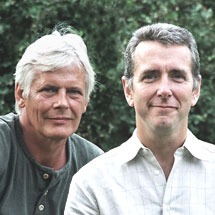 RiverHorse 1981 – 2017
In 1981, Allan and Peter started playing together again. Songwriting was resumed, but they were technically challenged with sequencers, recording equipment such as 4-track cassette tape recorder, later 8-track reel tape recorder, and generally not very good sound equipment. 1989 – 1992 they were joined by two female singers, Pia Kistrup and Kirsten Widding and played a few jobs. In 1993-1996 Peter and Allan took a break. But in 1996, they joined forces again and in 2000 recorded and released the CD (album) “RiverHorse”, in 2001 the maxi singles “Midnight Special” and “Bright Lights, Big City”, in 2003 the album “Sing Yourself Wet”, in 2005 the album “Classix”, in 2008 the album “Retriever” and in 2014 a single with the songs “Break Out” and “Some Rock´n´Roll. During this period Allan wrote 57 songs. More info about RiverHorse.
You can buy the RiverHorse CD´s in “Shop” and listen to sound-clips on riverhorse.dk/music-eng 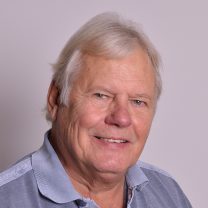 2018 – Allan Sorensen
In 1993-1996 during the break in RiverHorse´s activity, Allan recorded a number of songs by himself. These songs and many others were found in 2018 and transferred to PC (digitized) from reel tapes, cassette tapes, DAT tapes and MiniDisk. Substantial parts of this material needs new recording, but 28 of them have found their way to Allan’s new double CD “Songs from my past” which was released January 25th 2019.

From here the songwriting will continue and new songs will be recorded and published.